Like myself, one of my long time students, Laura Yodgee, was extremely frustrated by this and since I just haven’t had the time to do any testing myself, she took it upon herself to take on this lengthy task! She’s spent the last year or so testing products and keeping me updated on the results. We’ve had several discussions about these and also discussed our findings from Ginger at The Blue Bottle Tree who does many tests and experimentations with all things polymer related and has previously conducted many tests on various spray sealers (and again many of these just aren’t available here in Australia).

Hi all, my name is Laura. Dani has invited me to guest blog to share with you the results of some testing I’ve been conducting with some locally available spray sealers on three brands of polymer clay.

I’ve been a student and customer of The Whimsical Bead for the last 3 and a half years. A number of times in Dani’s polymer clay workshops the conversation has turned to finishing and in particular the fact that PYM II wasn’t available here in Australia. This fact had me thinking; surely there was a locally available brand that would work.

Whilst polymer doesn’t necessarily require sealing sometimes we want to make sure that surface embellishments stay where we put them especially if they may endure some handling.

My arts and crafts background is firstly in drawing and painting. I knew I had a can of Helmar’s Crystal Kote Matte Varnish spray at home. So around February 2016 I sprayed a couple of coats on three Premo polymer clay beads with some acrylic paint on them. I also used the spray to fix some soft pastels on a cab then I varnished over the cab. I was interested to see if there was any reaction, such as stickiness, on these pieces so I left them alone for several months.

After six to seven months there had been no reaction whatsoever. This was rather heartening and I shared my findings with Dani. Finally in late January 2017 I decided to do some more formal testing on a broader range of polymer clays and with a number of spray sealer brands in both their matt and gloss versions.

During this initial testing I emailed each of the manufacturers to ascertain if they had ever tested these products on any brand of polymer clay.

Helmar responded that they had not tested on any polymer clays but explained that their sprays are resin based and that the resin used is based on that used in museums around the world.

Boyles also hadn’t tested their sprays on any polymer clays.

If any of you have ever been involved in any kind of testing you would know that there is always a control group. For this testing I wanted to ensure that each of the sprays would, at the very least, successfully seal an artwork on paper.

At the same time as the testing took place on the polymer pieces I also sprayed sheets of pastel paper with both lead pencils and soft pastels on them.

All the sprays sealed these mediums successfully.

The main outcome for this testing was to test if any of the clays would react to the sprays ie would they make the clay go sticky.

Important Notes to Consider Before We Go On…….

1. The following is for information purposes only. Always test products for your own needs to ensure you don’t damage all your hard work and creativity.
2. When using spray varnishes, ensure the room you are working in has good ventilation and wear protective gear such as a mask and goggles.
3. Always adhere to manufacturers instructions and read their safety information.

SO WHAT WAS TESTED? AND ON WHAT?

The following three brands of spray sealer were used in both their matt and gloss versions:

The following clays were tested on:

The following surface treatments/embellishments were tested on both the Premo and Kato clays:

The pieces were reviewed at one day, one week, one month and after five months.

All the sprays are traditionally used for protecting artworks, craft items and photographs. Most state that they are acid free and protect from dust, moisture and abrasions. If your pieces are likely to have a lot of handling or be out in the elements please consider using a more appropriate sealer. 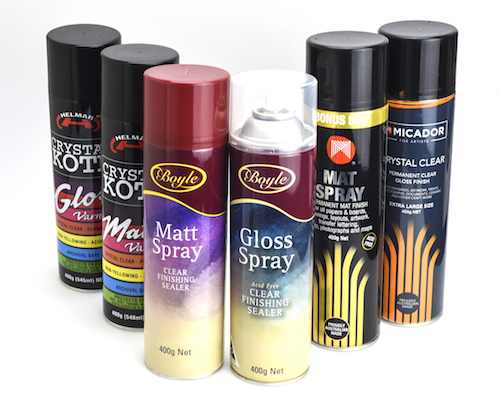 It is important to note that the spray tests were conducted outside in January/February 2017 in Australia, in humid conditions. It was one of the longest runs of humid weather we had had for years. Humidity or very cold conditions require extra drying time between coats and are not considered by the manufacturers of these products as the optimum conditions for the use of the sprays.

After spraying the test pieces were kept in containers in a room that varied in temperature over the nine months from summer through autumn and winter.

There were successes and some not so great results. As most of you will have a preferred polymer clay brand the results are listed by brand.

Even though the testing period has been over 9 months the finish on all the test pieces hasn’t altered from after the first month. Remember, like most varnishes and resins, the sprayed items will need time to cure. Try to handle the pieces as little as possible after the initial spraying and give them time to cure properly.

All pieces were given three coats with a minimum of half an hour between coats. There was a second smaller test group that were given six coats with the matt sprays only. They will be discussed separately.

Each of the matte sprays were also tested for any reaction to Pearl-Ex paint on varnish. There was no reaction to varnish noted.

All of the test pieces were tested with a drop of water. The water beaded on every piece and was easily wiped off leaving no mark.

A small dab of Isocol (alcohol) was also tested on each piece. As expected the area treated became slightly sticky which dried quickly with only slight marks left on some of the pieces.

The raised textured pastel and the gold leafing didn’t work as expected on all the matt pieces and to some extent on the gloss pieces. I expected that the gold leafing and raised pastel would be sealed as per the other mediums but for most of the sprays I was able to easily scratch or rub the coating and the leafing and/or pastel off the clays. I believe this was due to not pressing these mediums into the clay properly prior to baking it. I intend to do more testing on this.

All other mediums were sealed as expected.

Just an extra point, matte sprays will tend to slightly dull mediums with a shimmer or metallic shine to them.

None of the matte or gloss pieces were sticky although most would grip a little like they hadn’t completely cured.

Helmar’s Crystal Kote Matte Varnish spray was the best of the matt sprays. The finish was the most matt and didn’t show scratches. The Micador Matte could be scratched on the plain clay and has a satin finish. The Boyle’s Matte spray also has a satin look. Both feel smooth but grip a bit.

Boyle’s Gloss was the best of the gloss sprays but while the finish is smooth to touch it isn’t super glossy to look at. Helmar’s Gloss a grips like warm vinyl. The Micador gloss is shiny but the coverage wasn’t consistent.

Note on the piece given 6 coats: Helmar’s Matte stayed Matte whilst the Micador and Boyles Matte became shinier with the added coats and became easily scratched.

None of the matte or gloss pieces were sticky.

The sprays were not as successful on the Kato clay as on the Premo. Helmar’s Crystal Kote Matte Varnish was the best of the matt sprays. The Micador and Boyle’s matte sprays scratched off the plain clay.

Boyle’s Gloss was the best of the gloss sprays but the finish wasn’t super smooth. Helmar’s Gloss could be scratched off the plain clay while the Micador gloss beaded a little and didn’t achieve complete coverage.

Note on the piece given 6 coats: The extra coats did not solve the issue with the sprays being easily scratched off the plain clay. The Micador and Boyles Matte spray pieces become shinier with the extra coats.

The Sculpey III test pieces had good results with all the sprays. Helmar’s Crystal Kote Matte Varnish had the best finish. Both the Micador and Boyle’s matte sprays had more of a satin look than purely matt.

None of the matte or gloss pieces were sticky although the Helmar’s gloss had a slight grip to the touch.

Both the Micador Matte and Gloss could be scratched with a fingernail.

The Helmar’s Crystal Kote Matte Varnish was the standout of all the spray varnishes tested. Its finish was the most matt and had a smooth feel. As I’m a Premo user I would use it on figurines or items that I would not expect to have too much handling. I would also use it to seal and set mediums such as soft pastels prior to painting on a varnish.

For the gloss sprays the best one was the Boyle’s Gloss spray. Although the finish is not super glossy it is smooth to the touch with a consistent coverage. Luckily we have many other options for achieving a gloss finish on our creations. 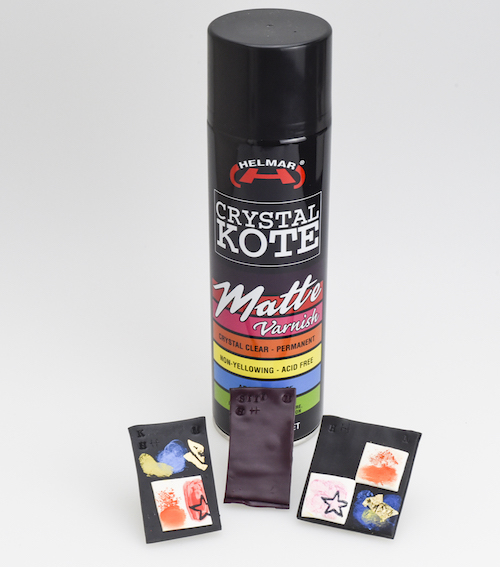 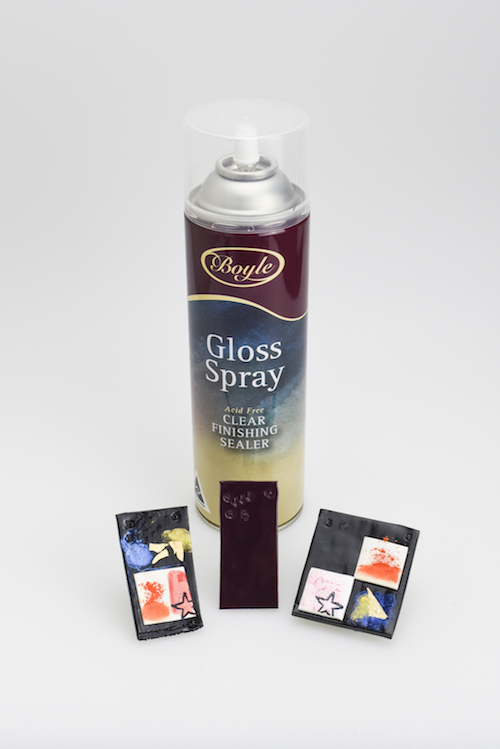 My originally sprayed pieces are now over a year and a half old and they have not gone sticky.

That’s it folks. Thanks for reading. Feel free to leave a comment. I know Dani would love to hear from you.

You can find me on:

3 thoughts on “Testing Spray Sealers on Polymer Clay in Australia”

Here at The Whimsical Bead, we rarely have sales a

I started the week off wonderfully, teaching these

The last week or so has taken a toll on my body. I

Learn at Home! We will be retiring many of our Wo

STUDIO OPEN TODAY! Come and see where we are and

The newly updated website is finally live! You wo

Here at The Whimsical Bead, we rarely have sales a

I started the week off wonderfully, teaching these

The last week or so has taken a toll on my body. I

Learn at Home! We will be retiring many of our Wo

STUDIO OPEN TODAY! Come and see where we are and

The newly updated website is finally live! You wo

Send us a message